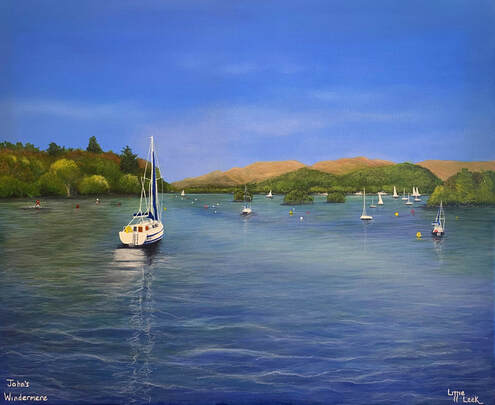 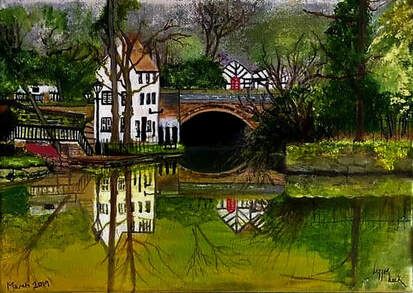 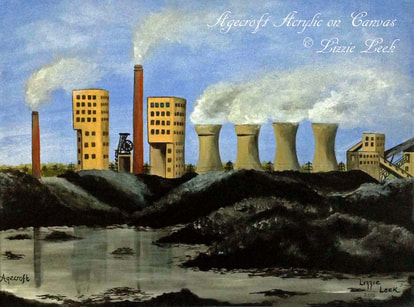 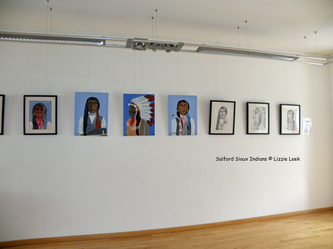 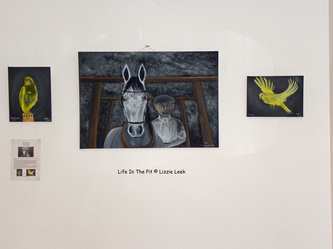 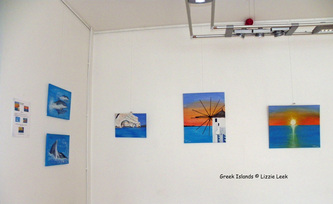 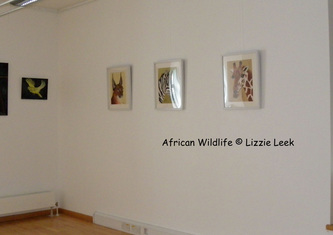 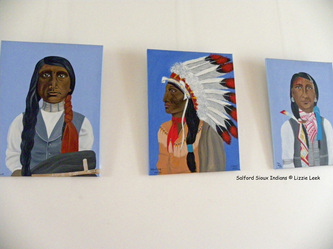 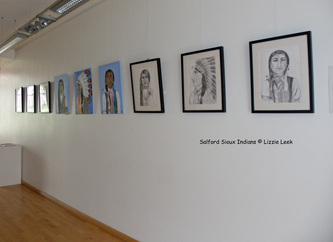 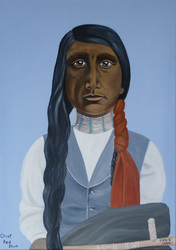 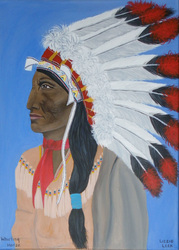 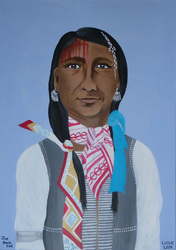 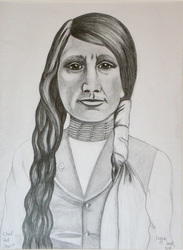 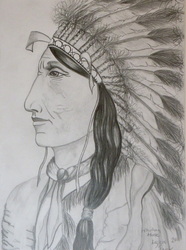 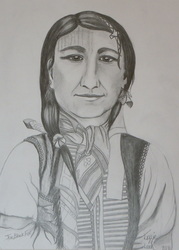 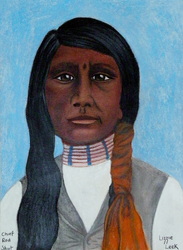 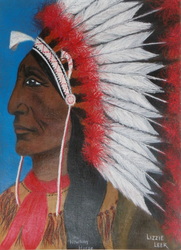 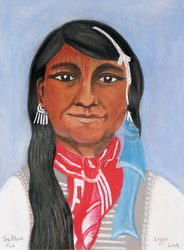 I chose to do three of the Sioux Indians who visited Salford - Chief Red Shirt, Whirling Horse and Joe Black Fox in pencil, pastel and acrylic, to show the different effects of exploring the same subject using different medium.

History of the Sioux Indians in Salford

The Sioux Indians camped on the banks of the River Irwell for five months in late 1877. They had been recruited by Bill Cody - an American army scout, who formed a Wild West Show consisting of 97 Native Americans, 180 bronco horses and 18 buffalo. The Wild West Show travelled to Europe on the State of Nebraska steamer which took two weeks to travel from New York to London. The 180 horses and 18 buffalo also made the journey. Bill Cody and the Wild West Show were invited to England in 1887 to be the main American contribution to Queen Victoria's Golden Jubilee celebration.

They played to packed audiences every night in a huge purpose-built indoor arena on the site of Manchester New Barns racecourse. Showing off daring horsemanship and re-enacting amongst others the Battle of Little Big Horn. During their stay in Salford an Oglala Lakota Warrior of South Dakota, who was 6ft 7in and known as “Surrounded by the Enemy” died aged 22 of a chest/lung infection. He was taken to Hope Hospital, from where his body disappeared. There was speculation that he was buried in a traditional Sioux ceremony conducted by fellow warriors Black Elk and Red Shirt and that his body was laid to rest somewhere at Salford Quays. There were no known records of him being buried in any Church yard or Cemetery in Salford or Manchester. But the mystery was solved in 2007 thanks to PC Nigel Keane, of the Metropolitan Police who patrols Westminster Cemetery that Surrounded by the Enemy was buried on 15th December in Westminster Cemetery.

Prior to the show travelling to Salford they performed in London as the main American Exhibition in the celebrations of Queen Victoria's Golden Jubilee. During the tour in London a small child by the name of Red Penny died aged 18 months, he was buried on August 16th 1887 in Westminster Cemetery. It is thought that Surrounded by the Enemy was taken to Westminster Cemetery to be buried nearby. Red Penny was the son of a fellow Inidian Little Chief and his wife Goodrobe.
​
In 1888 Goodrobe the wife of Little Chief gave birth to a daughter, she was the first American Indian to be born in England. She was baptised as St. Clements Church on 6th February 1888 (Ash Wednesday). She was named Frances after President Cleveland’s wife, Victoria after the Queen and Alexandra after the Princess of Wales. Her Indian name was “Over the sea among the Tribe” The whole cast of the show attended the service. The Indian Chiefs in feathered headdresses. There was also hundreds of spectators. Bronco Bill translated the service to the Sioux Indians and they also sang along to the hymn “Nearer my god to Thee”.


The show returned to Salford in 1891 and again during 1903 when Chief Charging Thunder a member of the Blackfoot tribe stayed behind with his family and settled first in Blackburn then Gorton, Manchester. He changed his name to George Edward Williams and worked for many years at Belle Vue as an elephant keeper. He died in 1929. Streets by the names of Buffalo Court and Dakota Avenue remain as a memory of the days the Wild West show and the Sioux Indians came to Salford.
© wallwork history 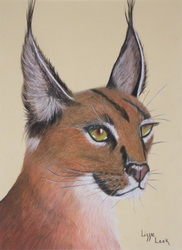 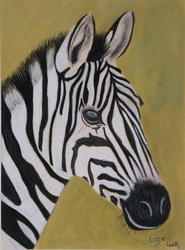 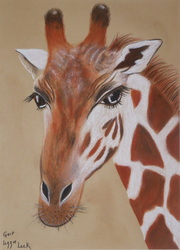 My African Wildlife are all drawn using soft pastel on pastel paper.
The Giraffe was a young giraffe I saw at Blackpool zoo. The Zebra was also at Blackpool zoo. I was inspired to draw the Lynx after watching a wildlife programme.
2013 Exhibition

Life In The Pit 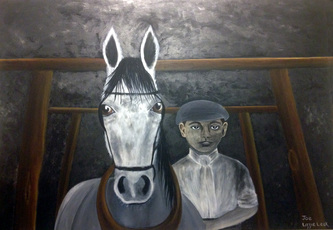 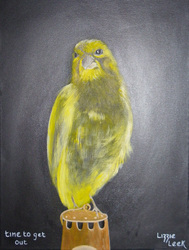 Life in the Pit was hard for all involved, animal and human life was lost in many tragic
disasters. Pit Ponies were lowered down mine shafts by pulleys and chains. They worked an eight hour shift in the dark hauling on average 30 tons of coal. Most were stabled underground and brought up to the surface during the miners' annual holiday. There were 70,000 ponies recorded working underground during 1913 in Great Britain.
​
I come from a local coal mining family. My Grandfather and all his brothers worked in
the local pits at Pendlebury, Swinton and Worsley.

Animals played a mayor part in saving lives in the pit, I wanted to paint the canaries
as a reminder of all the lives they saved and to remember all those fabulous little
birds who lost their lives detecting gas and giving the miners “time to get out” long
may they fly in freedom.
2013 Exhibition 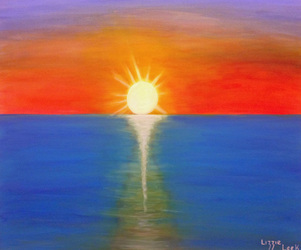 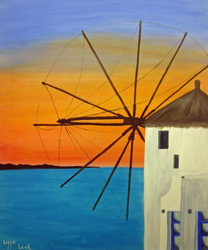 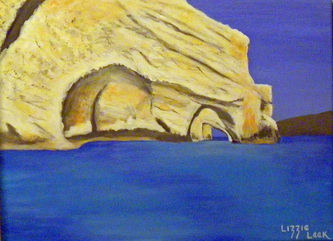 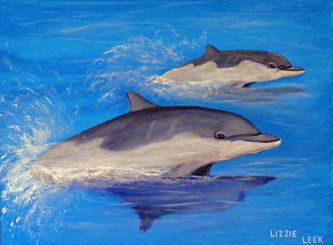 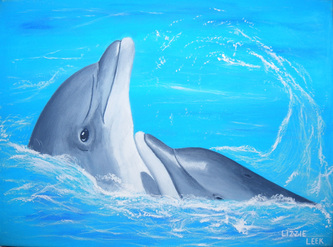 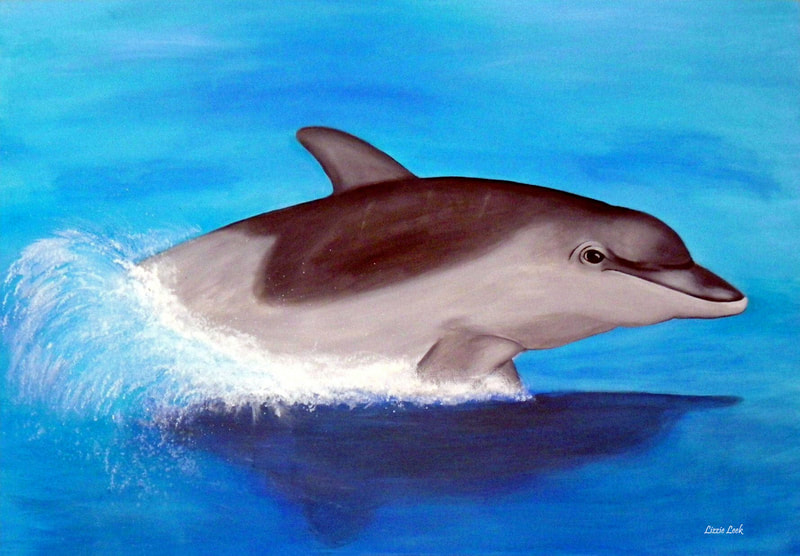